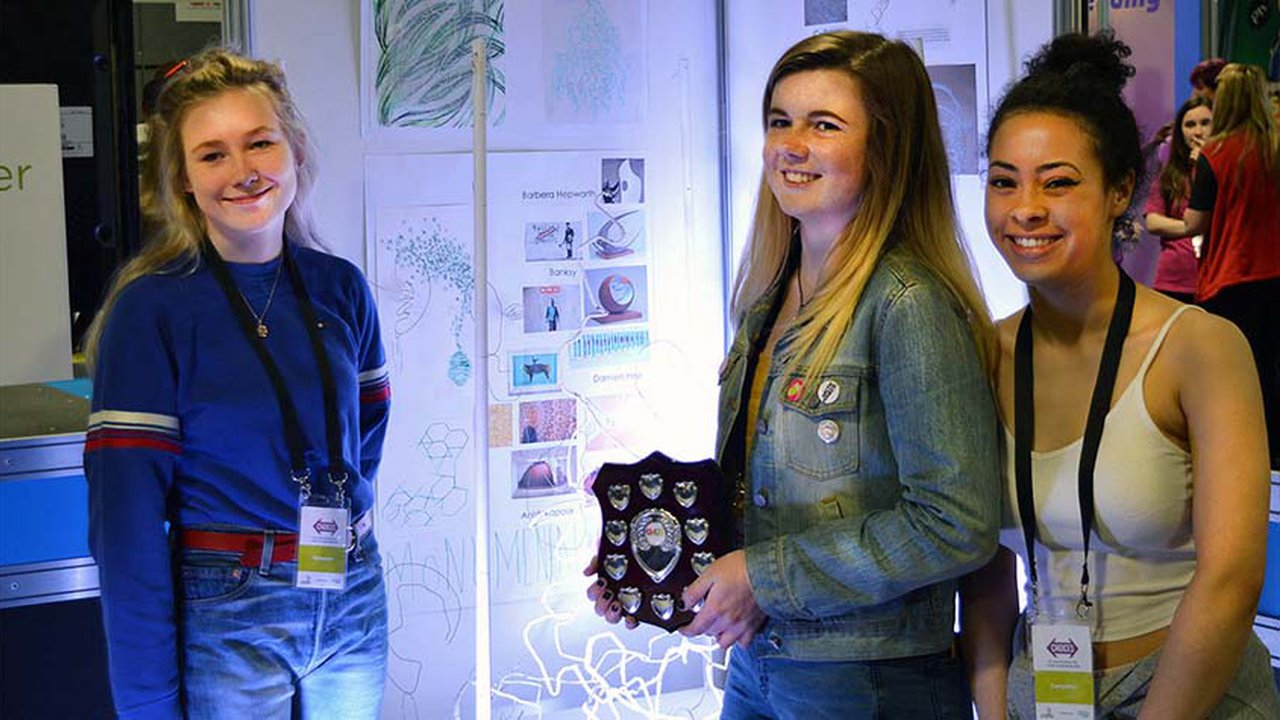 Students’ creation shows why the £87.4 billion arts are so important to education

Using art to demonstrate the importance of creative industries to the UK economy – and to education – has won an award for a trio of students from The Manchester College.

Art and Design students Molly Dalton, Hannah Warburton and Annabelle Potts went up against their contemporaries from eight other colleges across Greater Manchester in the annual GM Skills competitions, organised by Greater Manchester Colleges Group (GMCG).

With recent figures showing creative industries are worth £87.4 billion to the UK economy and employ more than 1.8 million people, the competition focused on the word ‘monumental’ to highlight why the inclusion of creative subjects in education matters so much.

The judges awarded Molly, from Ashton, Hannah, from Stockport, and Annabelle, from Oldham, the highest marks against each of the judging criteria and commended their design concept, depth of idea, sophistication and simplicity in answering the brief.

They incorporated a number of small ear-like structures within the overall artwork – a deliberate message to policy-makers to listen to the voice of one of the UK’s most successful industries.

Lisa O’Loughlin, Principal of The Manchester College, said: “Competing students had to celebrate and respond to British creativity and the importance of the creative industries, which have repeatedly outgrown the rest of the economy this decade.

“Their winning creation was inspired by the work of artists Anish Kapoor and Barbara Hepworth together with the communal and work-like nature of bee and ant colonies and the structures they form. This was used as a metaphor for the vibrancy, pro-activity and innovation associated with the UK’s world-leading creative businesses.

“I am always very impressed by the high-quality pieces of work our students produce on a consistent basis and I believe entering skills competitions like this really does raise students’ aspirations and provides opportunities for our students to be the best they can be.

“Well done to Molly, Hannah and Annabelle and all other students from The Manchester College, who picked up awards or competed in GM Skills. You’ve done us proud once again.”

The College’s Art and Design courses are accredited by the University of the Arts London and are offered at its Northenden and Openshaw campuses in South and East Manchester and at Shena Simon, the College’s campus in Manchester city centre. The competition was hosted by Bury College at the Choices Skills Show at Event City, Trafford Park.

It wasn’t the only GM Skills category where students from The Manchester College were among the winners.

Over at Tameside College, our Engineering students Kinza Nasar and Mohammed Taha, both from Levenshulme, won the maths competition. To win, they had to complete three rounds of maths as a pair, using different mathematical disciplines.

Daniel Klosowski and Michael Tailby were winners in the Brickwork category in the Construction competition at Hopwood Hall College.

And in the Music & Performing Arts competition, at Shena Simon campus, The Manchester College’s Kermani Anderson was the Level 2 Music winner and Chia Norris the Level 3 Music runner-up.

The production, Freedom, by The Manchester College was runner-up in Musical Theatre Level 3, as was Freak in Acting Level 3. In Dance, the College’s Down to Five was the winner of Level 2 and Trio was runner-up in Level 3.