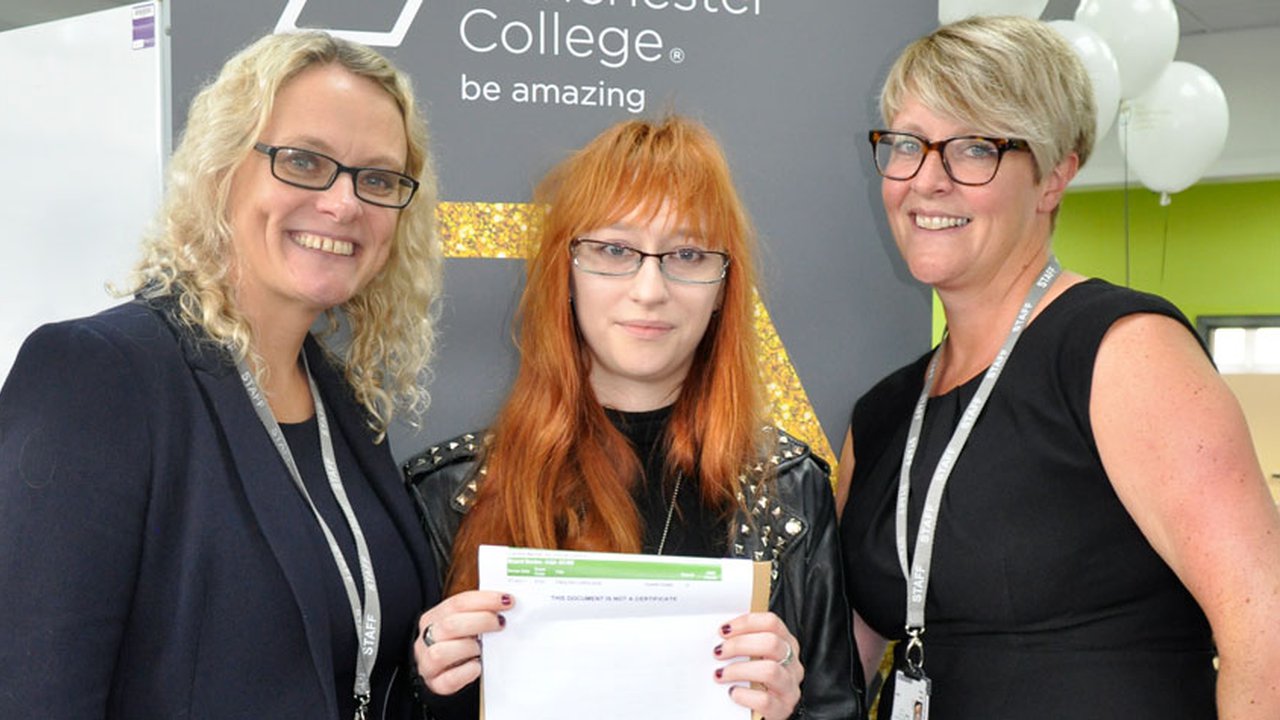 Guitar hero Ariadna Jarzynka-Kulwikowska struck a chord at The Manchester College by earning a 9 grade in GCSE English Language – the highest possible mark.

The 24-year-old, who plays bass in a band when she isn’t busy studying, was overwhelmed when she opened her results, having significantly exceeded her own modest expectations.

Ariadna, who studied at the College’s St John’s Centre campus, said: “This is beyond my wildest dreams to be honest. When I was on my way over I wasn’t sure if I would get a 6 or a 7 – that was my estimation.

“It has been a tough week with all the nerves but I am so happy now.”

Ariadna is continuing her learning journey with The Manchester College, on a one-year Social Studies Access course at St John’s. She then intends to take a Forensic Psychology course at university.

“I am really enthusiastic about the future and my GCSE result keeps me on track for my chosen career,” she continued.

“I have been fascinated by Forensic Psychology since the age of 16 and I will continue to work hard so I can make it my profession.

“First of all there will be a bit of time to celebrate with my family, friends and bandmates.”

Sisters Aisha and Iqra Zulfiqar are heading for a family celebration courtesy of excellent GCSE results in Maths and English at The Manchester College, just 12 months after they moved from Italy.

The talented pair, who live in Manchester, will now study second year Business BTEC Level 3 for 12 months at the College, and have set their sights on university after that.

Iqra said: “It is amazing news, and such a relief. We have been rooting for one another so it’s great to both come out of it with these grades after all the sleepless nights.”

The sisters also revealed they are aiming to follow very different career paths in the future.

Aisha said: “We are very close and have studied the same things so far, but it is likely to all change when we start to work! I adore architecture and would love to become an architect.”

Iqra added: “I would like to go into law, so that is my aim for the long-term. We do both want to study and live in London at some point though, so it’s not like we won’t see each other anymore!”

George has been praised for his “remarkable progress” after he got a 7 in English, less than 12 months after being at a grade 3 level.

The 19-year-old, from Wythenshawe, who has Asperger Syndrome, received support from staff inside and outside the classroom after leaving school a year ago.

He will now study Creative Media and Maths at the College’s Shena Simon campus.

Glen Drews-Power, Head of English Department, said: “Normally you will see students improve by a point in the time it has taken George to transform from a 3 to a 7. It is remarkable progress and he deserves all the praise he is getting.

“He is a very bright young man who has overcome adversity. He is reluctant to talk to people and so he often works on his own, so a lot of extra support was provided in and out of class.

“George attended bootcamp sessions, always worked extremely hard and had excellent attendance and punctuality. The hard work has paid off and we are all delighted for him.”

Alice Jenner is set to land an internship at technology giants Sony after making it third time lucky in GCSE Maths.

The 19-year-old got a 4 in Foundation Maths, having narrowly missed out when re-sitting the exam last year, and is now on course for a dream career in the music industry.

She said: “The internship hinged on getting this grade so after opening the envelope I cried my eyes out with a mixture of relief and happiness.

“You doubt yourself, so after last year’s setback I had times when I wondered if I would ever get it, but it turned out to be third time lucky.”

Alice is looking forward to learning about the music business from leading figures at Sony’s London headquarters.

She added: “I will be working with producers and label managers to discover what it is like to own and run a label, which is what I would like to do myself one day. It is going to be a really good grounding.”