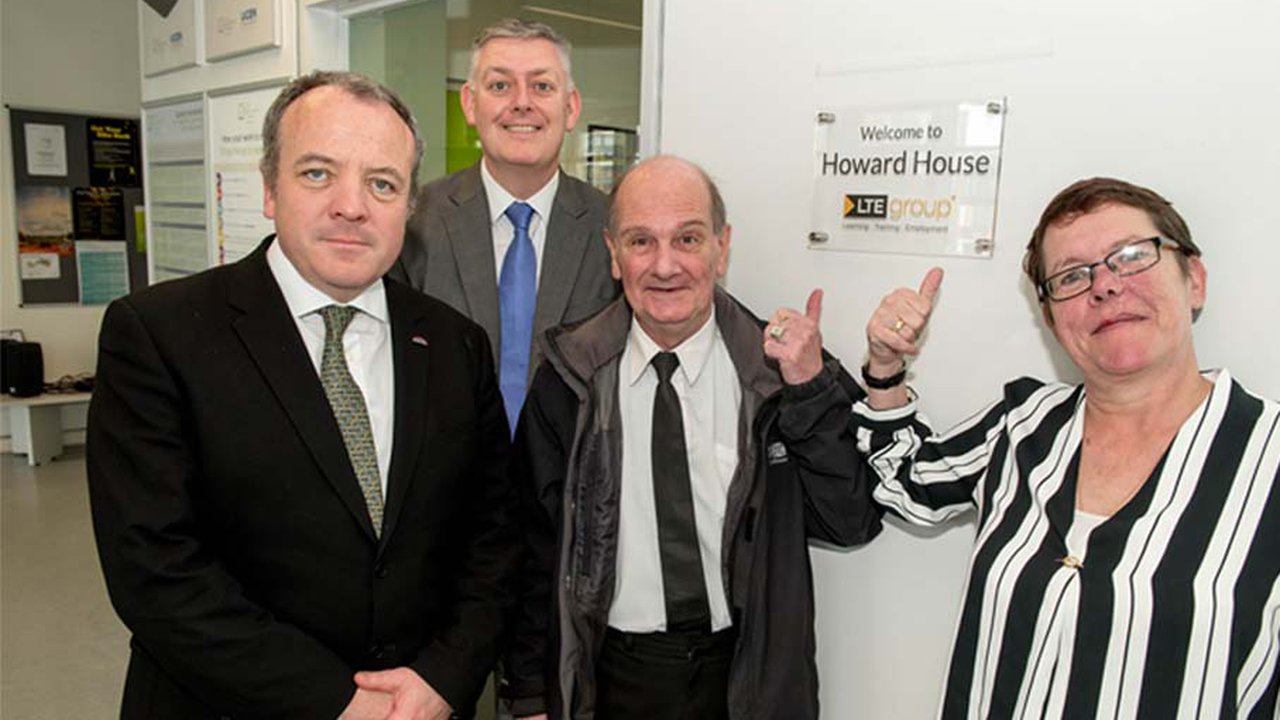 Kirsty’s family were VIP guests at the official naming ceremony on Friday 23 March and unveiled the plaque announcing the new name of the recently-refurbished site.

At the ceremony, Kirsty’s favourite charity Francis House Children’s Hospice were named the Group’s charity partner of the year and were presented with a cheque for £5,000 to kick-start fundraising efforts.

Phil Taylor, Director of the Kirsty Club and speaking on behalf of Francis House, said: “Thank you to LTE Group for its very generous donation, which will have a huge impact on the charity.

Naming the building Howard House and fundraising for Kirsty’s charity of choice is a wonderful tribute to her memory.

LTE Group has recently invested over £1.5m in upgrading the facilities at Howard House, which first opened in 2010, to house over 160 staff from the Finance, Health and Safety, HR, IT Services and Marketing and External Relations teams. The move has helped to consolidate group operations teams and promote closer collaborative working.

Wythenshawe and Sale East MP Mike Kane attended and spoke with the family, staff and students. The Labour Shadow Schools Minister said: “I’m delighted to have been invited here today. LTE Group’s investment in Howard House, and the surrounding site occupied by The Manchester College, represents a significant investment in Wythenshawe.

“Today has also been an opportunity to remember and celebrate the life of Kirsty Howard. Speaking to Kirsty’s mum and dad I know they are very proud of their daughter’s achievements, not only as an unbelievable charity fundraiser, but as a student at The Manchester College. Naming this building ‘Howard House’ will serve as a fitting and long-lasting tribute to Kirsty."

The investment forms a key part of the Group’s estates strategy and its vision to transform the way it delivers leading post-16 education, training and skills.

John Thornhill, Chief Executive of LTE Group, said: “The Manchester College is incredibly proud to have supported Kirsty in her studies and we’re honoured to name the building Howard House, to reflect her connection to us and the local area.

“We will also be using the occasion - and other events throughout the year - to raise money for Francis House in her memory, including entering a team of LTE group runners in this year’s 10k Great Manchester Run on Sunday 20 May.

“Kirsty was, and continues to be, an inspiration to many in Manchester and she remains a fantastic example of the values which we encourage in our colleagues, students and learners.”