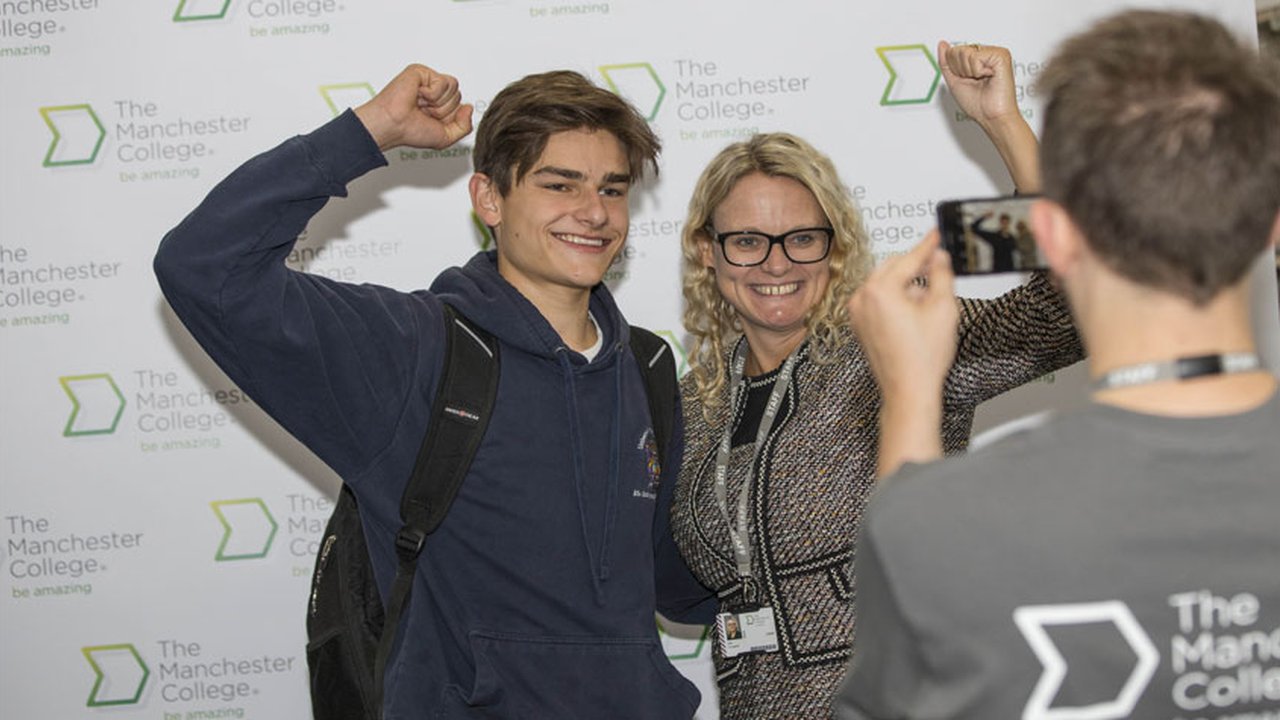 It's been a fantastic year for A Level results at The Manchester College, with a wide range of inspiring and heartwarming success stories. Here are a few of our class of 2018...

It’s a numbers game for Ailin

It was A* to the power of three when Ailin Guo opened her A Level results. She got A*s in Maths, Further Maths and Accounting.

She said: “I really like maths and it’s a subject I’m good at, but my teachers at The Manchester College really inspired me and I’d now like to work in finance and investment in the future.

“The courses I studied here were really diverse and they also gave me skills like problem solving that have been useful elsewhere in life.”

Ambitious Abbi Metcalf is California dreaming after making the grade in this year’s A Level results.

Abbi, 18, from Burnage, passed Psychology and Sociology with A grades, secured a C in her Biology exam, and has now accepted a place on a Psychology degree at the University of Manchester.

Abbi combines her study with managing a city centre restaurant and plans to take a gap year to work at the restaurant and save for a deposit on a house before starting her degree.

She said: “Ultimately, I want to be a criminal psychiatrist in America, as there is more opportunity for the role in the USA.

“My degree is a four-year course and we can study abroad in our final year, so I’m planning on doing that in California.

“I’m pleased with my results and while I’ll never be totally happy with all of them, this represents a new start for me.”

Mantas has the formula for success

A Level student Mantas Leketas mixed some challenging subjects and the results were just what he wanted. Three As in Chemistry, Maths and Biology set Mantas up for the next stage on his promising journey.

He said: “I really like pharmacology and studying the positive effects of what drugs can do for the human body, so I’m going to study Chemistry at University of Manchester.

“The thing I really enjoyed about The Manchester College was that our teachers really emphasised that you get out what you put in, and they were willing to help us with absolutely everything.”

The 18 year old, who came to Manchester in 2016 from Iran, overcame language and culture barriers to achieve his star grades, and will study a Mechanical Engineering degree at the University of Leeds.

Rouzbeh said: “I’ve always been interested in mechanical engineering and I knew that doing A Levels in these subjects was the best way to get to the top universities. Manchester is a modern city with really happy people.

“I chose to come to the UK because I preferred its education system and The Manchester College has been brilliant. I’ve loved being here because I had very friendly and helpful teachers. I was struggling with my English and living in a country with a totally different culture and language, and they taught me a lot, outside the classroom as well as inside.

“I’ve got a lot of goals. I plan on studying a Masters degree and I want to have my own engineering firm before I graduate. I’m not sure what I will specialise in, engineering is such a broad area and you can learn how to build cities and buildings or even the equipment to construct them.”

Tom has the sum for success

A Level student Tom James has always excelled at maths and now he’s reaping the rewards. An A* in Maths and As in Further Maths, Chemistry and Physics have given him what he needs to study Physics and Maths at university.

He said: “The subjects appeal to me because I like having a finite answer you can always get to. Studying them at The Manchester College has always been a good laugh and good fun; it’s never felt like a chore to learn.

“I’m really excited to go on to university, but I’m sad that this chapter with the College is over.”

Life at The Manchester College has given Callum Bancroft everything he needs to succeed in the next step on his journey. Callum achieved a B and two Cs in his A Levels and will go on to study Filmmaking at Manchester Metropolitan University.

He said: “I’d ultimately like to go into directing, but I want to learn about and understand everything about the filmmaking process first, so I’m really looking forward to this.

“Studying in the city centre with The Manchester College has given me real independence and has helped me to mature in a way that prepares me for university life. It has been such a welcoming, friendly and supportive environment to study in and I can’t say enough good things about The Manchester College.”

A career in research is on the cards for Chloe Walton, who passed her A Levels with As in Psychology and Sociology and a C in Biology.

Chloe, from Macclesfield, will start a Biological Sciences degree at the University of Liverpool and is the first of her family to go to university.

She said: “I thought I’d just missed out on the grades I needed, as I didn’t think the exams had gone very well, but I’m really proud of my results. I had a lot of phone numbers for Clearing services in my bag, but it’s great that I don’t need them now.”

Kaia makes the most of a rich experience

A Level student Kaia Yeomans achieved three Bs in Film Studies, English Language and Creative Writing. She’ll be studying English and Film at Manchester Metropolitan University, but the end of her A Levels is bittersweet.

She said: “I’m excited to be going to uni, but I’ll definitely miss the College as I love it and it’s been the best thing in the world.

“As soon as I walked in I knew The Manchester College was for me. The atmosphere was brilliant and the tutors make a huge difference, as it’s so obvious that they really care about your results and how you’re doing.”

Find out more about The Manchester College's 2018 A Level results.