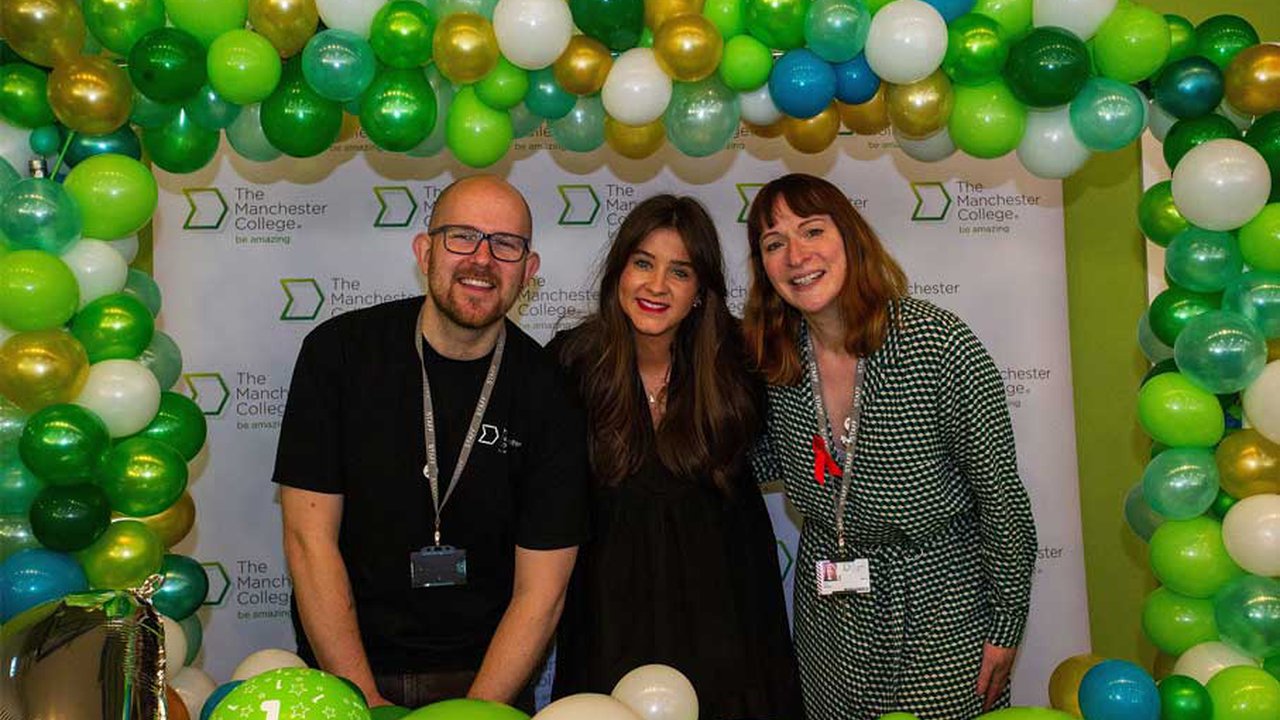 The Manchester College welcomed Coronation Street star and former student Brooke Vincent back to its Shena Simon campus, on Monday 3 June, to launch its week-long campaign focussing on the performing arts industry and the importance of the arts in education.

Brooke, who plays Sophie Webster in the long running soap opera, studied acting at the College. She joined current students for a question and answer session when she provided advice, along with her tips for starting out in the industry.

She said: “It’s amazing to be back at the Shena Simon campus and to have the opportunity to meet all the new, up and coming young performers. I’ve got a lot of fond memories from my time here and as a former performing arts student at the College, I would urge young people to come along and find out what is on offer. Studying for a career in performing arts has many benefits and opens up a lot of pathways within the industry, from acting to working behind the scenes, there are so many options open to you.”

Running until Friday 7 June, the ‘#didyouknow Performing Arts’ week will shine a spotlight on the performing arts industry, promote the career options available and showcase the breadth of talent and courses available at the College.

It comes as national industry-leading publication The Stage has launched a major new theatre careers resource ‘Get Into Theatre’. It aims to help break down the barriers for young people from under-represented backgrounds entering the industry, and is backed by musical theatre impresario Andrew Lloyd-Webber.

He said: “I passionately believe a career in the arts should be accessible to all and that young people…are able to easily find information on the training and tools they need to succeed.”

Other Performing Arts successes stories from the College include Emma Higginbottom, who worked as an actress before joining London-based literary and talent agency Curtis Brown, as an agent for theatre, film and television talent, and actress Vicky Binns, who has appeared in a host of TV shows including Emmerdale and Coronation Street.

Principal Lisa O’Loughlin said: “As an inclusive college, we are constantly striving to make the Arts open and accessible to all.

“Some hugely talented people from all backgrounds come through our doors and achieve fantastic results. It’s amazing to see former students, such as Brooke, Emma and Vicky, going on and gaining success in the industry.

“Whether you want to be an actor, singer, dancer or musician – or even if you want to work behind the scenes - you’ll absolutely love the passion, enthusiasm and creativity of everyone in our performing arts department.”

We offer a variety of Performing Arts course from Level 1 through to degree-level courses with our higher education partner UCEN Manchester. Find out more on our Performing Arts hub.