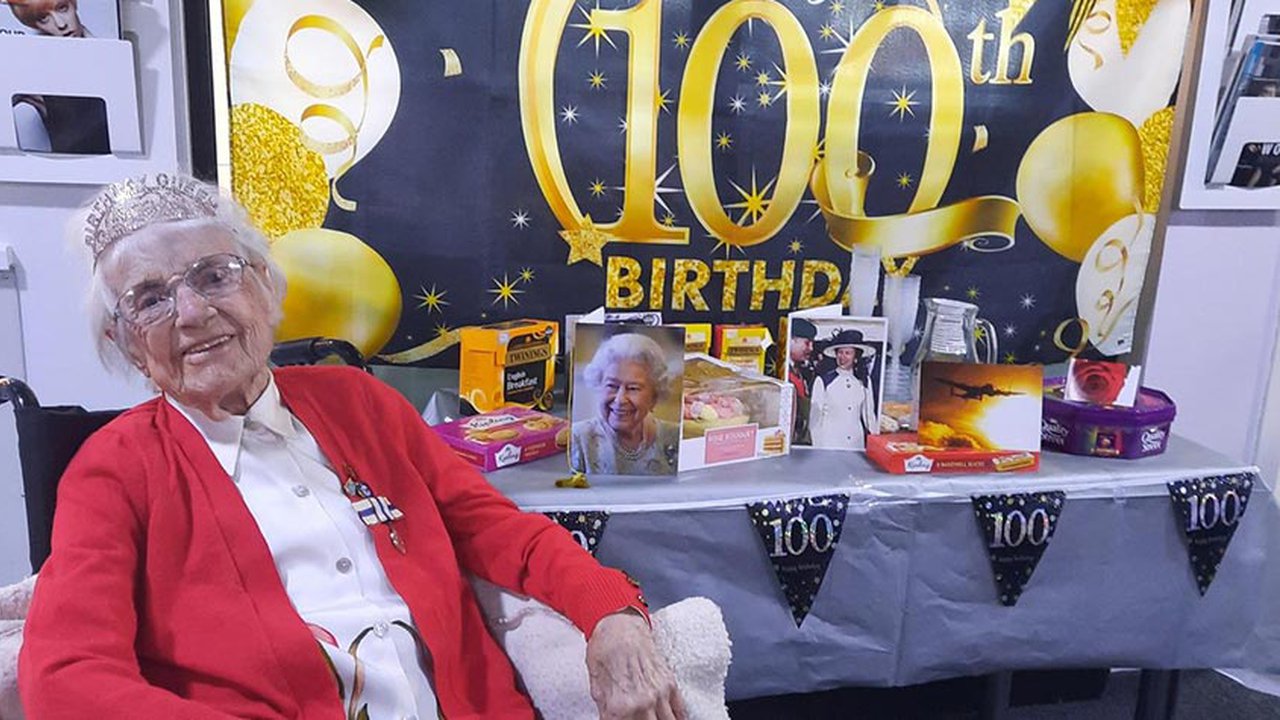 Staff and students at The Manchester College’s Northenden salon surprised their longest-serving customer.

The Hair & Beauty Team at The Manchester College’s Northenden campus have helped their longest-serving customer celebrate a special birthday in style.

Elsie Oates has been attending the salon for 53 years, going back to the College’s former campus on Moor Road.

So, when Elsie celebrated her 100th birthday on April 15, just days before the salon reopened to customers, the team knew they had to make a fuss, especially after a tough twelve months for Elsie in which she has recovered from an emergency operation and fought off Covid-19.

They surprised their special guest with gold banners and balloons and treated her to tea and cakes, before her shampoo and set with Hairdressing student Sharma Barker.

Lead Technician, Jane Theaker, said: “I left school in 1985 and started a two-year YTS and that’s when I first practised on Elsie. Then I started work here as a technician and she’s still coming, even when we moved campus.

We think the world of Elsie because she’s always got a story and she’s got an amazing sense of humour, she’s very funny!

"She is such a strong woman as well. As soon as we reopened, we wanted to get her in to celebrate her special birthday.”

Elsie was born in Openshaw on April 15, 1921. Aged 18 at the start of World War Two, Elsie joined the RAF as a clerical worker, stationed in Hounslow, Middlesex. After moving back up North and meeting her husband, Elsie raised her family in Baguley alongside her job at the Ministry of Works.

A much-loved mother-of-two and grandmother-of-three, Elsie now loves to get out and about with her friends, especially for a game of bingo, as well as spending time with her neighbours.

Her son Keith describes her as “a very strong and determined woman, with a will of iron and heart of gold.” He also reserved special praise for College technician Shereen Wilkinson-Rennicks, who regularly visits Elsie at home to check on her, bring her shopping and much more.

“Shereen is an amazing woman and we are so grateful for what she does,” he said.

And although Elsie admitted she much preferred being 21 than 100, she was delighted to be back in the salon. Reflecting on her 100 years, Elsie said: “I’ve always lived in Manchester and been proud of it.”

“I must say, I preferred it when I was 21 – I was having much more fun! I was in the Air Force and we used to get free tickets to all the shows in London with the American and Canadian soldiers!

“I used to live next to the College when it was on Moor Road and I’ve been coming here for 53 years. They say I’m the most loyal customer in Manchester!

I keep coming because all of the tutors and students are very good, especially Shereen.

"She has been wonderful and I don’t know what I’d do without her. My neighbours say God sent her!”

The state-of-the-art Studios of Hairdressing, Beauty and Make-up at The Manchester College’s Northenden and Harpurhey campuses are part of its Centre of Excellence for Hair & Beauty, where students learn the skills in a real, working environment, preparing them for a successful career in the industry.