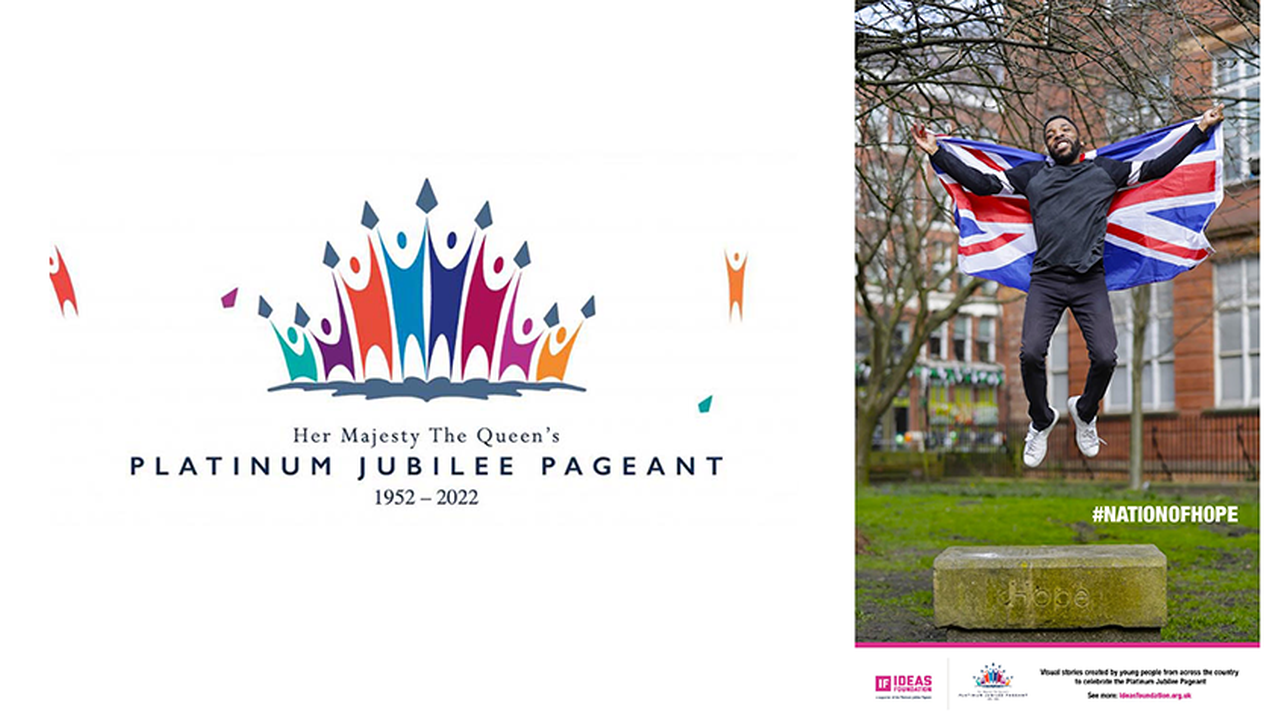 Work created by Creative Media Production students as part of a project with The Ideas Foundation has been chosen by the Platinum Jubilee Pageant to feature in the celebrations.

The Manchester College is proud to have been chosen by the Platinum Jubilee Pageant to work with The Ideas Foundation on a creative brief, introduced into schools and colleges across the UK to celebrate hope and opportunity for young people.

Under the theme ‘Commonwealth of Kindness’, students were invited to develop ideas that celebrate the values of Her Majesty The Queen’s Platinum Jubilee.

30 students from the Level 3 UAL Creative Media Production and Technology course, took part in a range of digital storytelling workshops, working alongside leading photographers such as Canon Ambassador Clive Booth.  Students had the opportunity to use Canon kit to visually communicate images, words and photos that celebrate the local community.

The poster created by the students and titled #NationofHope, will appear on a digital billboard as part of the Platinum Jubilee Pageant national celebration from Monday 30 May to Friday 3 June.

On hearing the news their poster had been chosen, Jordan said: “It was just surreal, I don't think there are any other words I could pick. It had been months since the shoot and so to hear that one of our photographs had been chosen for something so momentous as to celebrate the Queen’s Jubilee has left me at a total loss for words.”

Yeng Roberts, tutor, said: “The Platinum Jubilee Pageant, Canon/Ideas Foundation bootcamp was an amazing opportunity for the students to engage with each other and work collaboratively, especially since the easing of covid restrictions. The students really enjoyed working with creative team, their experience and advice has been invaluable to them. They have worked on developing their skills and creativity to visually communicate their concepts that represent what the Platinum Jubilee Pageant stands for. I was so impressed with what they achieved, and the standard of work produced.”

“Hope, optimism, neighbourhoods and communities are key to this celebration year,” said Heather MacRae, CEO of the Ideas Foundation. “We can see how talented young people from across the country have created amazing digital stories that celebrate The Queen’s values of kindness, commonwealth, and inclusivity.”

Over 600 students aged 11- 19 took part in the project. Work produced by the students will be displayed on Clear Channel’s digital Out of Home screens over the week of the Platinum Jubilee celebrations.

The poster created by The Manchester College students will be displayed at Asda, Eastlands, Manchester.

This is a fantastic achievement, whilst this work is a tribute to the Platinum Jubilee it supports the students in preparing them for work, building their employability skills and confidence.