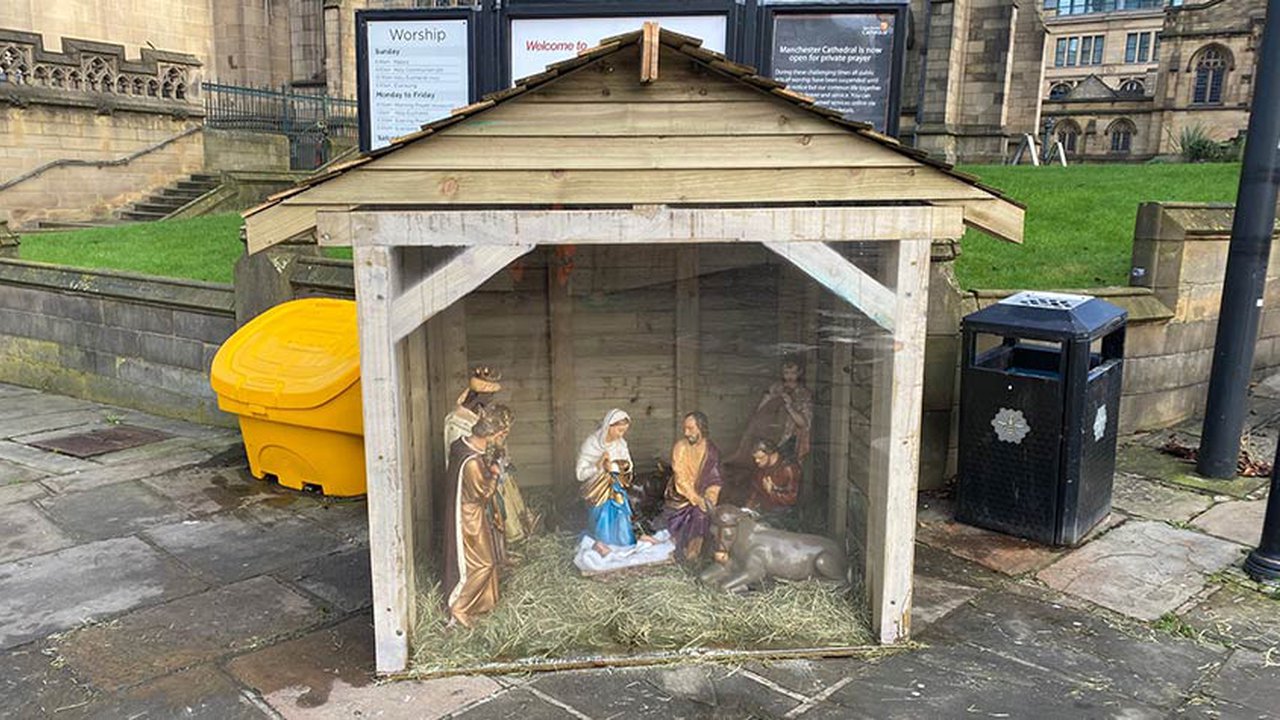 Carpentry and Joinery students at The Manchester College have designed and built this year’s Christmas crib for Manchester Cathedral.

The Level 2 Carpentry and Joinery students were briefed to create a Christmas crib, measuring 2mx2mx1.2m and fully illuminated, to be displayed outside Manchester Cathedral in the city centre.

The crib featured in this year’s Manchester Christmas light switch-on on Wednesday evening (3 December), which took place at the Cathedral in a change to the traditional event in Albert Square due to the pandemic.

The event was filmed by BBC North West Tonight with the College students invited to attend alongside the Lord Mayor of Manchester councillor Tommy Judge, the Bishops and Deans of Manchester and Salford Cathedrals, members of the Manchester Cathedral choir and selected NHS workers who flicked the switch.

Chris Wright, Assistant Principal, Automotive Construction Engineering and Logistics, said: “We were approached by Manchester Cathedral via our Group Chief Executive, John Thornhill, to support a joint initiative between Manchester and Salford cathedrals.

“Manchester Cathedral wanted its own dedicated crib so our carpentry and joinery students, whose qualification will feature in our brand new Industry Excellence Academy, were asked to create one.

“Our students, who will become our T Level students in September 2021, did a superb job designing and building the crib to a professional brief in just a two week window.

"We are thrilled that they have been able to use their professional skills to produce such an iconic Christmas structure for Manchester Cathedral and the city as a whole to enjoy.”

John Thornhill, Chief Executive of LTE Group, which the College is part of, was in attendance and said: "Work on the College’s new state of the art city centre campus is now well underway and when it opens, our friends at the Cathedral will be close neighbours of ours.

Going forward I hope that this will be the start of many joint initiatives to support people and communities in the city.

"Our students have worked against very tight timescales to support what is a very different yet very fitting start to this year's Christmas period. I’d like to pass on a big thank you to all of them for their hard work."

Manchester Cathedral has worked closely with The Manchester College on a series of projects.

Find out more about our wide range of Construction and Engineering qualifications.